Contrary to his name, the Australian Shepherd is not an Australian breed. His early ancestors are traced back to dogs that worked, mostly Australian imported, sheep in Western United States). The Basque shepherds on the west coast were known for their 'little blue dogs with bob tails' during the late 1800’s and early 1900’s. and so the Basque shepherd and his little blue dogs came to represent shepherding as much as the Scotsman and his Collie in Britain.

Although their exact origin is unknown, there is no doubt that the breed was developed in the United States by livestock producers who used the dogs for working.

The Aussie is truly a do-it-all canine. Give them a job and outlet for their energy (like obedience, Treibball, agility, Frisbee, mantrailing, finding your car keys etc.) and you will have a beautiful, devoted companion for many year to come. Aussies thrive in a households that include them in activities as part of the family. They want to be where you are and involved in whatever you’re doing, not relegated to the backyard by themselves or in a crate all day long.

It may sound strange but the most important thing to get an Aussie to do / learn is to take their rest. Sleep gives the brain the chance to process impressions and ensures that they can start fresh with their next task. Aussies who do not get or take a rest will get over-stimulated, no longer function well and will show the associated behaviors such as constant barking, breaking things, constant pacing, stress licking etc.) The Aussie will occasionally test his limits, just like teenagers they will push their boundaries to see what they can get away with. Enforcing doggy rules and being set forth will make both the dog and you much happier. All in all, the Australian Shepherd is an intelligent, devoted companion, suitable for a smart, active, and dedicated owner who wants a dog to share in his or her life. 9 points to consider whilst deciding if the Australian Shepherd is definiteley the dog for you, click here.

Besides having a versatile charachter the Aussie also has great looks. They are a medium sized dog, well balanced and slightly longer than tall. The average age is estimated between 12 and 15 years. Because they have many different colors and markings every Aussie is unique and definitely worth seeing. The Aussie exists in 4 basic colors. Black, Blue-Merle, Red and Red-merle, with or without white and / or tan markings. The Aussie also has a variety of eye color: brown, blue, amber or any variation or combination thereoff, including spots and marbeling. Australian Shepherds can have a full tail or a NBT (natural short tail). An NBT can have any length between no visible tail and a almost complete tail.

The Aussie is a breed where, just as other breeds, (genetic) disorders occur, like cancer, epilepsy, hip- and elbowdysplasia, MDR1 and eye problems. For individual information about these disorders take a look at www.ashgi.org, www.ascb.be and Vlaamse Fokkerijcommissie 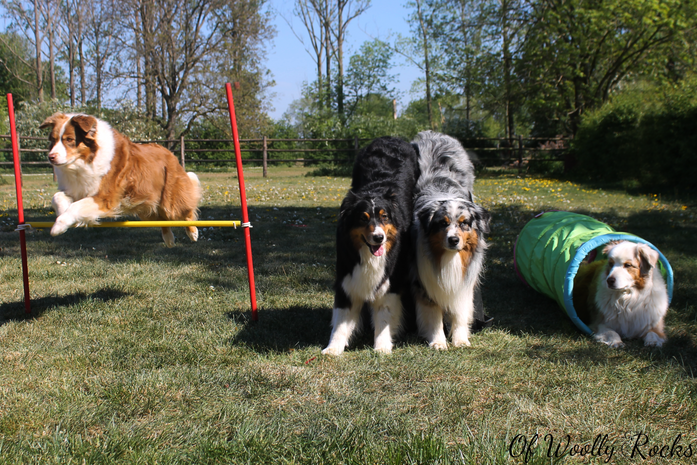 Of Woolly Rocks Australian Shepherds | All pictures on our site are copyright of ''Of Woolly Rocks'' and may not be taken without our permission © l Webdesign: J.Foreman